Opponents of abortion (those who oppose a woman’s right to abortion and those think it is merely immoral) typically make five kinds of logical errors:

1: The seen and the unseen:

Abortion opponents see the fetus which was aborted but ignore the good things that the abortion made possible. These include the mother who is free to pursue her life goals and the lives of the children who are born into families that want and are ready for them. The decision to have an abortion is not arbitrary: it’s a choice the mother makes because she believes that she and her future children will have a better life by delaying childbirth. Extensive research confirms that abortion improves the lives of mothers and their future children. More importantly, no one, and certainly no politician is more qualified or morally justified to decide what will lead to a better life for a mother and her family.

A world without abortions is not a world with more children — it is a place with children born to parents who are not psychologically and financially ready for a life-long responsibility. Children who are born to loving parents who welcome them to the world and are prepared to care for them are far more likely to grow up into successful, mature adults. This is why protecting the right to abortion is one of the most effective ways of reducing abortions!

This failure of the imagination is known in economics as the Broken Window Fallacy – we see the economic activity created by the need to repair a broken window, but do not see the goods that can no longer be bought because they were redirected to fix that window. Likewise, we see the children who are products of unwanted births, but we don’t see the children who never had a chance to be born into a family that wanted them. Instead, countries that ban abortion deal with higher rates of single-parent families, poverty, and crime.

Abortion opponents equate a human being with his genetic legacy. To them, an aborted fetus represents a lost potential life, with all its richness. But the inherent value of a human life is not determined by our genes, but the interaction of our genes with the environment we grow up in, especially the ideas and culture we are exposed to. A fetus is only a part of the recipe for a human being. A human being is not merely a biological machine, but a rational animal, with a rich internal life. We can argue when that mental existence becomes a possibility, but it is certainly closer to birth than conception.

To take a sci-fi scenario, a fetus grown into a brain-dead grown adult in a vat is not a full human being either. Human beings are the synthesis of biology and culture. Theists often talk of the fetus as having a “soul”, but whether you believe in genes or a mystical essence, the error is the same.

The distinction is especially clear early in the pregnancy: a blastocyst is a microscopic clump of cells, physically almost identical to the fetus of any other mammal. To say that a bit of protoplasm is a human being ignores the essence of what a person is: an independently functioning rational animal.

A human being can exist without an exclusive biological dependence on a host, intentionally interact with its environment, and possess the basic attributes of cognition. A fetus lacks these attributes. True, a newborn infant is entirely dependent on others for its continued survival, but this is a relationship, not a biological necessity. Virtually everyone in a civilization would soon die without the cooperation of others, but these are contractual relationships, not biological dependencies. A baby can be adopted by a willing family, a fetus cannot.

The moment of birth presents a clear physical, biological, and psychological point when a parasite (as an analogy, not a derogatory term) becomes a metaphysically independent being.

This is the logical fallacy of denying that a distinction exists because there exists a continuum. For example, there is no clear distinction between a stubble and a beard, yet the existence of unclear cases does not invalidate our ability to identify someone with a beard. Likewise, difficulty in identifying the exact instant that a fetus becomes a human being does not mean that there are no clear differences between a fetus (say, a single-celled ovum just after fertilization) and a clear example of a human being (an infant, or you and me).

We can acknowledge difficulty, and err on the safe side for moral or legal reasons, but we need to base our conclusions on facts, not arbitrary religious doctrine. I outlined what I believe are the relevant facts in the “potential vs actual” section above. By contrast, I think that the act of conception meets no reasonable criteria, especially at the beginning of the pregnancy. As I detailed, a fertilized ovum is not metaphysically equivalent to a human being, and only begins to approach that status towards the moment of birth, which firms an unambiguous epistemological and therefore legal distinction. (We can argue about the ethics of late-term abortion, but they are a red-herring in the debate the meaning of conception.)

A false dichotomy is a false alternative between an either/or situation when an additional position exists. In regard to abortion, the dichotomy is this:
“Women must be responsible for their sexual choices and forced to bear children they do not want in order to preserve traditional marriages, families, morality, religion, or another value. Either we hold people responsible for their choices or anything goes.”

There are two false dichotomies in regard to abortion:

Second, there is no conflict between a lifestyle which separates sexuality from parenthood and healthy, loving, responsible families. Modern society has provided men and women with safe and effective technologies that separate sex and childbirth — condoms, birth control pills, emergency contraception, and as a last resort, abortion. These tools liberate women by allowing them to enjoy fulfilling sexual lives for the first time in human history.

While independent women with sexual agency are a threat to those who wish to force them into their vision of a woman’s role in society, there is no reason that women who desire sex for reasons other than childbirth are incapable of healthy and responsible relationships, marriage, and child-rearing.  Having sex for pleasure without the risk of a lifelong obligation does not preclude women and men from forming healthy romantic relationships.  Even abortion critics must accept this – or require a fertility test before any couple is allowed to have sex or marry.  What about those who are infertile or past menopause?

Allowing women to choose when they are ready to raise a child greatly improves the likelihood of raising children in stable, loving families. Children should not be a sacrificial obligation which women must be forced into, but a personal, selfish choice that parents pursue because it will bring joy and a multitude of other benefits into their lives.

You probably don’t know how to squat. In fact, you are probably not capable of squatting for any period of time, even though it is one of the basic human positions, like standing and lying. Why does it matter? Because, as I recently discovered, squatting is the optimal position for all sorts of things — eating, working, defecating, exercising, and especially giving birth. Learning to squat can even prevent cancer!

I first learned about squatting through “Natural Childbirth the Bradley Way.” Squatting is one of the exercises the book recommends to build muscles for birth as well as an alternative birthing position. What most people knows as “squatting” is the partial squat — where only the ball of the foot touches the ground. This position cannot be held for long because it requires continual muscle tension. For the full “resting” squat, you must plant your feet flat on the ground with your buttocks resting on the backs of the calves. Try it. You feel off-balance, right? That’s because a life of sitting on chairs and wearing shoes with heels (including most men’s shoes) has shortened your Achilles tendons and left many muscles underdeveloped.

While “civilized” people who have office jobs and read blogs rarely squat, it is still very common in the developing world. In China (where I live), you will often see people squatting while working or eating. The majority of people across the world also squat on the toilet. Is that because they don’t have money to pay for western-style toilets and chairs?

Actually, it turns out squatting offers numerous health advantages for all kinds of activities. First, you must realize that human beings did not evolve to sit on chairs and toilets. This matters because the unnatural position we use while eating and defecating sitting down causes various health problems including:

Squatting also happens to be the ideal position for birth. Lying down to give birth is a very recent “innovation” due to the replacement of midwives with doctors in the last century. Lying flat for birth reduces blood flow to baby and placenta, increasing the risk of fetal distress, whereas squatting maximizes the spaces between the pelvic bones and puts pressure on the cervix. Unfortunately, after a life time of sitting and wearing heels, most women cannot maintain a squat without extensive exercise.

Squatting for back pain:

A few years ago, I went to a social event that required me to stand while talking to people for several hours. Although no exercise was involved, the effort of just standing for an extended time caused such a strain in my back that I was in pain for weeks. Most adults have experiences some sort of back pain and assume that this one of the costs for the privilege of walking upright. In fact, the reason back pain is so common in the West is because we spend most of our time sitting or reclining rather than walking and squatting.

Farewell to the chair? 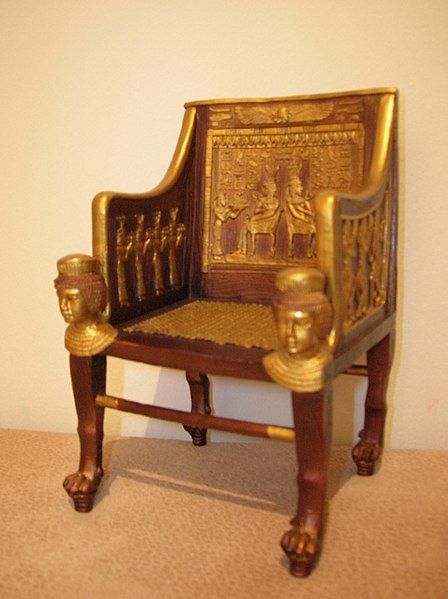 So we need to change our ideas about birthing position and toilet design, but what about chairs? Chairs for common use (rather than as thrones for public display) only became common with the European Renaissance.

I’m not an expert in ergonomics, but I suppose that sitting in a chair certainly has practical benefits. It allows for a better view of the surroundings, better access to operate machinery, and probably requires less calories. Are these benefits relevant to the modern office worker plugged into on a computer terminal all day? I don’t know. The important thing is not to rely exclusively on the chair (or couch or bed) to support one’s body. Ultra-comfortable ergonomic designs work against us when they allow the muscles that support the back and neck to atrophy. Every now and then, you must let your muscles and tendons do the job they were designed for.

As Chief Wizard at Liberty.me